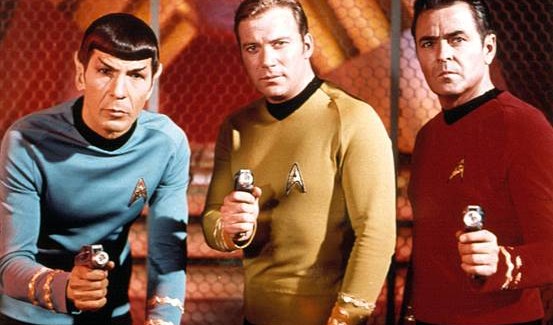 All the hubbub this month has been about Star Wars, and with good reason. The world has been waiting for a great sequel to the original Star Wars films, and the new movie delivers. It has great pacing, impressive skyfights, a dazzling light saber duel, and a female star who gets to do a lot more than wear a gold bikini.  But amid all the excitement over Star Wars these days, I can’t forget my first geeky sci-fi love, one that takes place not in a galaxy far, far away, but in our very own solar system a few hundred years into the future. From the very first time I was allowed to stay up late and watch an episode of the original Star Trek with my dad in syndication on a small TV with a floppy antenna, I was hooked. In the episode, a tall, sinister alien roams underground caves on a faraway planet and kills its victims by sucking all the salt out of their bodies. What nine-year-old kid wouldn’t love that?!  As it happens, my first introduction to Star Trek took place at the same time I was being introduced to expat living. In 1984 we were enjoying an “exchange summer” in England made possible by my father’s job as a minister with the United Methodist Church. In a transatlantic switcheroo, my dad exchanged jobs with a minister in England, along with our houses, cars, and even pets. For one summer we were able to live as the locals did, in a small town in southeast England called Chandler’s Ford, while an English minister and his family enjoyed the Arizona desert town […] Read More

The Castle still stands. Its continued presence in our lives defies all logic, makes a mockery of prediction, reminds us each and every day with its rainbow-hued mass of the impossibility of full knowledge and the futility of control.  I was sure the delivery man was coming to pick it up today. The reason is simple: today was the first day that I made a plan with the Jumpy Castle in mind. (Please note the capitalization now, out of respect. The Jumpy Castle has become an entity, a fixture: not simply an inflatable vinyl bag shaped like a house but an important, abiding part of our lives.)  Until today I didn’t want to make any assumptions. For each of the 22 days of Jumpy Castle Jackpot that we have enjoyed before this one, I counted no chickens and made no playdates. If neighborhood kids caught a glimpse of bobbing on the other side of our fence and wanted to partake, they were welcome to join the party, chosen children blessed by the bouncy house. The gates were opened for a jumpy house free-for-all while my daughter’s wardrobe was tapped to lend out an assortment of old bathing suits and cotton t-shirts to clothe the masses while they splashed. But I made no arrangements.

Jumpy Castle Watch: Day 14. What can you do to spice up the holidays on a hot, quiet December day before Christmas? Rent a jumpy castle: Gaborone’s answer to all your child-related entertainment needs. I suppose the term is actually “jumping castle” (or jumping house) but in the quick casual Motswana way of speaking, what I always hear is “jumpy castle,” so that’s what I’m going with. In America of course we would call it a “bouncy house.” Two days before Christmas I decided to get my daughter and her five friends who are visiting from Zimbabwe a jumpy castle for the day so they could squirt each other with water, play around on the slide, and work out some good sugar-induced energy in the inevitable sweets-laden week before the holiday.