In the end it all happened so quickly. A short text message announcing the impending end of the castle’s Reign. The appearance of the delivery man, looking different than I had seen him last, in 2015, when he, like everyone else in town, was lit up from within by the joy of Christmas and his month of holiday bonus pay. Now he looked, as all of us do, like just a normal guy in the drudges of February, that bleak zone without celebration. (Presidents’ Day in Botswana is observed in July, and if you don’t get a day off from work, it doesn’t count as a real holiday, Valentine’s Day.)

He quietly set about dismantling the fortress that for so long has stood sentry on our dirt patch of a lawn. My daughter asked him in a plaintive voice why he was taking the Jumpy Castle away while my son shot off a few pre-verbal reproachful glances and tried to stand on the deflated castle while it was being folded into a neat bundle.

I’ll admit that it was time. 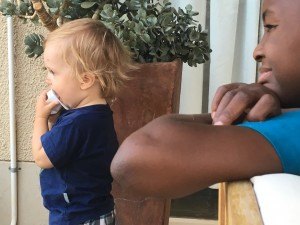 All good things must come to an end, kids.

As is the case with even the brightest of gems, the luster wears off a little with the passing of days. During the final two weeks of the Jumpy Castle Era, I had to cajole the kids outside to get jumping while they dragged their feet and said maybe they would prefer to play with Legos. We had also started to adopt a very cavalier attitude towards proper swimming attire, which meant that my daughter on more than one occasion jumped into the water with her school clothes on or simply stripped down to underwear before taking a hurtling leap onto the water slide. I won’t miss the sound of the blower motor gearing up right outside my son’s bedroom window during naptime, or the guilt I felt every time we ran the hose into the tiny splash pool in drought-plagued Botswana.

But there’s no doubt that a Jumpy Castle-shaped hole has now been opened in our hearts.

Where will I throw the kids when they have been indoors too long and get that claustrophobia-induced whiny voice? (Well, the real pool I guess. Don’t feel too sorry for me yet.)

What will I talk about in the grocery line at Woolworths when I run into friends now that Jumpy Castle Watch is no longer our obvious and immediate source of conversation?

What will function as the natural centerpiece of every barbecue, birthday party, and Sunday afternoon get-together going forward? Now we have only the giant leopard tortoise as a special feature, and there are whispers from the kids that Herkimer is played out.

And why oh why did I not schedule that nighttime Jumpy Castle party for adults that so many of my friends were begging for while I still had the chance? (Okay, just one friend. You know who you are.)

We will survive of course.

A shadow of its former self.

For the next family birthday party, I will have to rent a Jumpy Castle for just one day like the common folk, but I will not complain. My daughter wants to know why there is now a UFO-shaped landing pad pressed into the yard where grass used to be: I will shrug and wait for rain to fill it in. The neighborhood kids who thought that the Jumpy Castle was a permanent fixture of our yard now look at me with unveiled disappointment, but I will try to hold my head high.

I’m sorry to let them all down, but I’m glad that for a few, shining weeks our house was not just a house, but a beacon of bouncy house fun where anything was possible for the grand price of $1.23 per day. And also that the smell of hot vinyl has become an important part of my kids’ childhood memories. Sayonara, Castle!