Yesterday I spent the day driving back and forth from Islamabad to Lahore, which is like driving back and forth from Boston to New York City (4 1/2 hours each way). I could probably post all 40 photos I took en route on Pakistan’s major highway as they were all so interesting, but the rule is one photo a day so I will comply!As much as this photo says something compelling about the state of highway regulations in Pakistan, the upper limit of engineering and physics, and most of all, the question of WHAT is in those bags, it is also impossible for me to post a photo like this without drawing some metaphor out of it. As the truck rolled by, laden with as many goods as I have ever seen on a truck, I happened to be reading a book called “Clean” about doing a three-week detox. The author of “Clean” was making a persuasive case that the continual and repeated onslaught of toxins we ingest through our food, water, and environment loads your body down, becoming a burden that makes you tired, cranky, and miserable. His evidence and argument really made me want to do the detox, despite the fact that I will be eating quinoa for breakfast and something called a “Green Drink” for dinner. Watching this truck roll by just in the middle of this dramatic passage really reinforced the message. Anyone else feeling loaded down? Want to do the detox with me? I could use the moral support. And someone with whom I could compare the finer points of green drink dinners. […] Read More 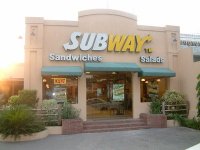 Make It a Foot Long

The Subway addiction continues. Today I had the WORST craving for another Subway sandwich, so I went to the franchise down the street from the office. (There are seriously like 20 Subway stores in Lahore; they’re like McDonalds in New York City.) Based on my two visits in the last 24 hours, here are the following recommendations I will make should you ever find yourself inclined to visit a Subway in Pakistan:The quality of the veggie toppings is quite high: the tomatoes a deep red, the green peppers positively shining with color, and the red onions sliced fresh and looking vibrant. This may be because the franchises are not importing their produce, but are getting it locally. This seems like a good place to ignore that warning about not eating raw fruits and vegetables in Pakistan. The high quality of the veggies helps make up for the somewhat dubious quality of the meat. I wouldn’t say it’s bad, just that it’s like nothing you’ve ever seen at an American Subway. I ill-advisedly ordered a meatball sub last night. When he cut open the meatballs to put inside the bun and I saw that they were white inside (chicken meatballs??), I quickly ordered a 6-inch veggie sub on the side. Good move. On the other hand, the tandoori chicken is delicious. And there are about 15 different sauces you can put on your sandwich. Although, maybe it is already this way in America now too? I am old enough to remember when you could only get mayonnaise and yellow mustard on your Subway sandwich. And oil and vinegar, of course. That is the special dynamite secret […] Read More

It’s like someone at the Avari Hotel has been reading my blog. This time around when I checked into the “Lady Avari” wing, there was my pound cake, snug in a little box waiting for me to devour. It’s the little things that make my stay in the woman-only floor worthwhile, Avari. Good work.I was in Lahore for half the week on a short-term assignment. The work was good, even if the beginning of the trip started inauspiciously. Here I am seconds after stepping into a huge, squelchy, and deceptively innocent-looking pile of mud upon arrival at the Lahore airport. I survived with the aid of my very helpful driver who tracked down a bottle of water and helped me wash off my foot and flip-flop, though the latter will never be the same. This photo also shows way more skin that can ever be shown appropriately in a public place like the Lahore airport. But, ah, American habits–like showing flesh above the ankle–die hard.

So, they put me on the whore floor. Let me explain. It started out as innocently as any other business trip: board a plane in the morning, arrive in the not-too-distant city of Lahore armed with a full agenda and a small suitcase of hopefully not-too-wrinkled suits. It wasn’t until reaching reception at the hotel after a full day of meetings that things turned a little strange. The front desk cheerfully and efficiently checked in my boss and then turned to me and said, “You’ll need to check in on the third floor.” Confused but ever courteous, I decided to go with it and headed up the elevator alone. Upon arrival on the third floor, I suddenly found myself in a very different environment: one with lots of flowers, soothing music, and the presentation of a glass of cool, sweet melon juice. Third floor check-in isn’t so bad, I thought to myself. It turns out I had arrived in “Lady Avari” land, which is the name the Avari Hotel has given for their women’s only wing of the hotel. The reception desk on the third floor already had a print-out of my passport (weird), but they asked me all the right questions, as in What newspaper would you like delivered in the morning and Do you know about all the different restaurants in the hotel and What is your bust size. Wait, no they didn’t ask that one. But it was starting to feel like it was possible. I was escorted to my room, which was pink and girly and full of small bud vases. It was pointed out to me that all my calls […] Read More