It is spring in Gaborone, so the animals are out on the streets. During the winter, you could be fooled into thinking you were in a normal suburban town or small city in the United States: clear wide roads, shiny office buildings, commuters in Toyotas and Nissans making their way through red lights to work.

But the blossoms and new green growth of spring have brought the animals out of the woodwork. Driving to lunch you’ll need to slow down while a herd of cows lumbers across the highway in front of you. On the way to the gym you’ll have to pick you way through a dozen lazy goats sleeping in the grass. And little armies of chickens strut without fear in front of your car as you make your way home.

Inevitably I am thinking about what’s on the dinner menu for the evening when I pass them. Does my careful application of the brakes to avoid running over a hen and her line of scratching chicks make me feel a little weird about tucking into chicken enchiladas an hour later? Yes it does. How about looking into the gentle faces of three brown-eyed cows in a dusty parking lot just minutes before enjoying the full plate of beef stew warming on the stove when I get home? For sure. Most Americans are not used to living among the animals they eat. 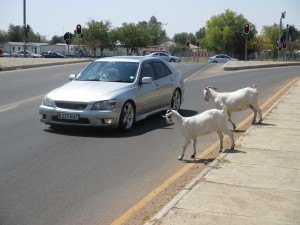 When we first moved here Lila couldn’t talk yet, but she quickly learned how to say “cheep-cheep” to let us know she wanted to take a walk and visit the chickens in the neighborhood.  Chicken is also by far her favorite thing to eat. It doesn’t seem to bother her at all that the animal can be both friend and food: after all, she’s grown up that way.

One of my favorite Barefoot Contessa recipes is for chicken that you barbecue whole right on the grill: lots of lemon zest and fresh juice, rosemary, good olive oil and garlic. When I make it, I dunk three whole chickens in the marinade to bathe overnight and then throw those beasties on the grill the next day for whatever dinner party we are rustling up.

The only problem with the recipe is that you have to start by “flattening” the chickens. The note in the recipe says you can have your butcher do this, but I laugh heartily at the sheer ridiculousness of figuring out how to get that done in Botswana and set down to the job myself, which requires cutting out the neck bone, flipping the bird and whittling out the breast bones before smushing the whole thing down in the marinade to soak up all the juices.

Neck bone? When’s the last time you got intimate with a chicken’s neck bone? The first time I tried it, our nanny Patricia saw me hacking away pointlessly and immediately took over, carving up three birds in 30 seconds flat with the expertise that only years spent around real live chickens can give you.

I still remember my friend Fahim years ago separating turkey meat from bone with the skill of a knife-wielding magician at my Thanksgiving dinner in Pakistan, and it makes me wonder if butchery is an art that has been lost to Americans. Another thing lost to Americans is bone pleasure: by that I mean taking the meat right down to the bone and sucking the marrow out. And then chewing up the smaller pieces of bone for good measure. Patricia does this. My colleagues at work do this during our end of the month staff lunches. And now my daughter does this too. Her very favorite is chicken drumsticks, devoured until nothing but a flimsy bone remains that she then uses to tap along with her favorite album of Cajun Children’s songs on the table afterwards.

Have you ever seen a plate of bones when everything edible is truly, truly gone? Pork ribs look like delicate small pieces of a reed-like musical instrument taken apart for tuning. Beef becomes a hard white stack of bolts—something you would buy at the hardware store. And chicken vanishes to almost nothing: a dainty heap of sticks no thicker than straw that you could fling into the wind without anyone noticing. 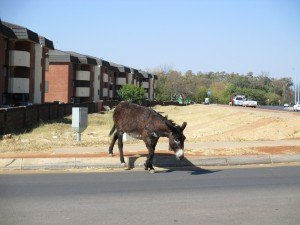 As much as chickens are enjoyed with gusto, the truth is that cows are the real currency of the land here. Supposedly they are all grass-fed. Supposedly they aren’t given any antibiotics or hormones because the government doesn’t allow it. There is no way to tell this for sure; nothing is labeled in detail. There are just rows upon rows of pink meat in the chilled grocery coolers, cheap and fresh and coiled on little styrofoam plates. Thick, glistening steaks, fat sausages, and piles of ground beef (“beef mince”) give way down the aisle to other, stranger items: bony oxtails, feathery tripe, shiny piles of intestines and fuzzy gray tongue. Botswana imports lots of food from South Africa, but not beef: every bite of it has to be from here by law. Beef is Botswana’s national heritage.

A few years ago a man stole three cows from Patricia’s father. The thief was caught and sentenced to jail for 27 years, because the law decrees nine years in prison for each cow. Cows have long been the de facto form of property and wealth in the region; to take them is really to steal someone’s life away, and such a theft is very serious business.

Patricia’s father found out about the jail sentence and said “No, I can’t take food away from his family for 27 years.” If they don’t have a wage-earner at home and relatives don’t take pity on them, children are vulnerable to being abandoned, homeless, out of luck and starving. So Patricia’s father refused to press charges and let the man go free. But recently they found out that the man had stolen again from someone else so he will be going to jail this time for sure. He only took one cow, so the sentence will be nine years instead of 27 at least.

Last week I went in to dispute my water bill at the Botswana Water Utilities Corporation. (This is always a good idea since the meter readers frequently guesstimate the amount and bills only come in the mail every six months or so, making it hard to keep up.) After I ironed everything out with the Customer Service rep sitting behind his big desk in a nicely-tailored suit, we got to chatting and I discovered that he has a nine-month-old baby with his girlfriend in Francistown—quite a few hours’ drive away from Gaborone. He doesn’t get to see his family much; he said that he wished he could get married and have them move closer. I asked him why they weren’t married yet. He swiveled a bit in his black office chair and replied that his girlfriend’s dowry is 15 head of cattle at 5,000 pula each ($600) because of the particular tribe she is from and there is no way he can afford that right now.

This is Botswana—a man saving up his salary in his modern office building to buy cattle while executives from the diamond industry sliding by in new BMWs are forced to slow down for the cows in the road. A little new, a little old: side by side, making the ride more interesting.

Pregnant in Africa, Part 2: Getting Ready to Deliver