I just got back to Boston today from a few days in Washington DC. I was there for a conference, some pre-Islamabad meetings, and a visit to my naturopath so she could tell me the best way to fend off parasites from Pakistani street food. It was a beautiful weekend–so warm we could have drinks outside at Sequoia on Sunday afternoon and pretend it was June. Being there made me think about moving and living in a new city and change in general.

Right after college, I moved to Washington DC for two years, and I can’t say I loved it. I was broke, working an entry-level job, and shell-shocked by my switch from sunny Santa Barbara and the luxury of college life. All of a sudden I was getting up early, wearing nylons, and wrestling with parking meters, winter clothing, and a fridge crammed with the food of five roommates. I missed California, the easy measure of academic success, and not talking about politics.

I think I overlooked some of Washington’s beauty in the process. I remember thinking it was cool that I could see the lit dome of the Capitol outside my bedroom window and that I studied for my GREs in the gorgeous Library of Congress reading room. But I always knew I was going to grad school and would be off before too long, so I never settled in as much as I could have. My friends and I had lots of after-work drinks on the roof of the Hotel Washington, we watched Fourth of July fireworks from the office balcony of whichever Senator someone we knew was working for. We hosted book clubs, dinner parties, salsa dances, and Uno tournaments. Jenn and I moved to my favorite neighborhood, Adams Morgan, and brokered a mostly peaceful relationship with the Ethiopian restaurant downstairs. I think I enjoyed myself a lot of the time. But I also felt like the years were running out, that I should hurry up and make something of myself, get into grad school and move on with my life.

Why the rush? I’m not sure. I wish someone would have told me to relax, let it all work out, have fun and enjoy the experiences, even the dumb and useless ones. (Oh, and to buy real estate. I could have made a fortune on one of those derelict rowhouses in Logan Circle that are now part of a gentrified downtown paradise.) I’ve been thinking a lot about those years lately, ten years after I moved away. It’s probably because I’ve been in DC so much over the last few months, and because a lot of my friends from the Obama campaign just moved to the city to make that same post-college transition. They’re looking for jobs, apartments, and a good, solid beginning to the rest of their lives. 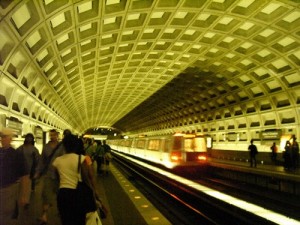 Back then, nobody told me not to worry and just live, or maybe lots of people did and I didn’t listen. It’s too late now for those words about DC; instead I’ve enjoyed those years more in retrospect, when I remember how much fun I had running into Kenneth Starr on the elevator (a true celebrity in those days) or sneaking a lunchtime cigarette on the Mall with the girl who sat next to me at work. How much I loved driving over late at night to my favorite monument, the Jefferson, to sit on the steps with my friends, looking over at the White House and talking about where we were going to end up. In short, I had all of those experiences that I would advise any 22-year-old to have upon moving to a new city and starting things; I just didn’t know how to enjoy them without constantly looking too far ahead.

I bring this up now, of course, because I know better this time around. I doubt I will be sneaking cigarettes in Pakistan, or salsa dancing, or having rooftop drinks of any kind, but I imagine there will be lots of other experiences that I would be foolish to miss. This time around I’m not going to.