I was pulled over by the police this morning.

I was running late to work as usual (Lila’s various peanut butter incidents and unattended water bucket emergencies always expertly timed to coincide with my departures) when I almost whizzed past the police checkpoint strategically placed between Marina Hospital and Gaborone Secondary School. The checkpoint had gotten me once before: two weeks ago I had to pull over, open my trunk and dig around in my purse to show the officer my driver’s license, which gave him enough time to notice that my registration tags were expired. When he said he had to impound the car (“It is like you are stealing the road”), I shamelessly played the pregnant lady card, imploring “How do you want me to get to work then, walk?” while pointing to my already huge belly. Luckily Batswana are very sympathetic to mothers, especially expecting ones, and he let me go.

So my registration tags were shiny and new for this morning’s checkpoint, although my driver’s license was yet again in the trunk. I keep my stuff there while driving because the preferred method of roaming thieves here is to smash the passenger window at a red light and grab bags and phones off the front seat.  I told the officer it was in the trunk, got a blank look, corrected the word to “boot” (British English reigns in Botswana), pulled over to retrieve the proper documentation and all was well. Well, mostly well. He did eye the “Class C” license category on my license and said in a suspicious voice: “Only Class C?” I explained that in the United States I would only need a Class A license if I was driving a semi-truck. He waved me on.

I have been thinking a lot about the police these days after hearing the news coming out of Ferguson, Missouri. Living overseas, news comes to me from the United States in a strange way, filtered on one hand by international news outlets who cover our tragedies in dry, somber tones with just the facts (and who don’t cover celebrity funerals or missing teenage girls) and on the other by my Facebook mini-feed. From so far away, it is easy to see my entire country as a violent, troubled republic seething with racial tension, poverty and division. On the other hand, the shining happy faces of my friends and their families on summer vacation—splashing around in pools and posing at ballparks—make America seem like an idyllic, utopian paradise that I am crazy to ever leave.

It depends on what you are looking at, of course. For example, I have a Facebook friend who is committed to posting stories about police brutality in the U.S. The sheer number and intensity of these posts has shocked me over the last year. When I see yet another article flick up about a police officer punching an elderly woman in the face, or breaking someone’s ribs who wasn’t resisting arrest, or shooting another unarmed black teenager, I don’t want to believe the articles are real. And yet, they keep coming. The latest conflict in Ferguson, Missouri is less shocking to me because for the last year I have been witness to the articles my friend has been drawing to my attention, almost none of which are picked up by the mainstream media. The news out of Ferguson is still distressing, but I’m just not as stunned anymore by the inordinate response, the para-military atmosphere, the blatant disregard for freedom of the press.

When I was a kid I was taught that police officers were always the good guys, the ones you run to for help, the calm collected refuge in case anything goes wrong. I imagine this is still the case in many (most?) instances. But it is disturbing to see the riot gear come out so quickly in a small town.

Which brings me back to Botswana’s boys in blue. (Who aren’t all boys but who do, in fact, wear blue. Is this color choice an unwritten universal rule for cops across the world?) The truth is that all bets are off when it comes to the police force in a foreign country. Contrary to popular belief, you are afforded no special privileges by virtue of being an American overseas. If the local police haul you off for whatever reason, no matter how invalid or inappropriate, no knight in shining armor from the US Embassy will come riding in to intervene. For that reason any encounter with the law when you are away from your home country comes with an added level of unease: Am I breaking some law I don’t know about? Am I being targeted for being an American? Can I still get my one phone call from jail? 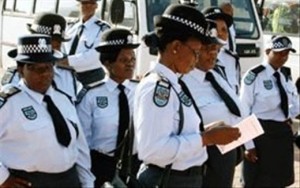 But luckily the police force in Botswana reflects the general mood and atmosphere of the country itself, which can be described as: “Let’s all just get along and no matter what happens, the most important thing is for everyone to stay polite.” Sure, I am a minority here, but part of an historically privileged one, and the most extreme bias I have faced from any government official was when the policeman looked disdainfully at my Class C license.

A few months ago Drew got pulled over for making an illegal U-turn. With expired registration tags. While driving without a valid license. He and Lila had been making a run to the store for ice for a brunch we were hosting when it happened. The police gave their usual spiel that they would have to impound the car, but they sounded apologetic and agreed to first follow Drew and Lila to the store for the ice after Drew explained that his wife “really, really needed it.” This is why an entire police jeep full of serious-looking men in uniform languished in the parking lot for ten minutes while Lila rode on Drew’s shoulders into Square Mart for supplies. Then they followed Drew back to our house and stood in our driveway for 30 minutes with vague talk of us “going down to the station,” but no movement was made to actually take us there. We thought perhaps they wanted a bribe but no hints were dropped to that effect. In the end they piled back into their truck and left, so we went back into the house and dug into the fresh bagels and cream cheese.

I think the police here really are trying. There has been a recent push to crack down on break-ins and carjackings, and they are proud of this fact. When I explained to the officer this morning that my purse was in the boot because I am worried about smash-and-grabs from the front seat, he shook his head back and forth and said “No, no. We don’t have those anymore in Gaborone. We have taken care of all that.” Well, it happened to a friend of mine just a few weeks ago so if I was feeling bolder I would beg to differ, sir. But like most people in the face of any police officer, friendly or hostile, fair or biased, overseas or right at home, I kept my mouth shut.