Yes, everybody hates the Ice Bucket Challenge now. Because it is just a stunt that doesn’t really encourage medical progress, or because it is a stunt that generates too much money for one disease, or because the tide of the internet turns fast and whatever was popular last week doesn’t stand a chance today.

But like every American who lives overseas, my today is your yesterday: I am always hopping on the bandwagon a little late and more than a little unfashionably. For example, I finally got comfortable with skinny jeans, which means they have probably been over now for years. This is just the price you pay for the glamorous expat life: always late to the party.

It should also be said that no one actually *challenged* me to the Ice Bucket Challenge, making me the girl who shows up late to a party I haven’t even been invited to.

Sidenote: I actually have no problem with this, as party-crashing was a specialty of mine back in my days as a broke graduate student in Boston. There is one magic ingredient you need to crash a party and only one: confidence. One time a group of us were headed to a party in Cambridge and passed another, cooler-looking party on the way there. They had tiki torches: enough said. We brazenly walked into the crowd empty-handed and discovered it was a party celebrating some kind of softball or bowling league or kickball tournament win. It wasn’t a big gathering: maybe 30 people in an open space, certainly not enough for my group of five to go unnoticed. And yet, everything worked out just fine. At one point my friend Jason was asked by a party-goer, “So, who do you know here?” and he answered “John. From school.” That is how we discovered this is the classic and perfect answer to use if you ever find yourself in this situation. Although in Pakistan it should be changed to “Usman. From school,” and in Botswana I would recommend “Tebogo. From school.”

Back to business–I did the bucket thing anyway. As an added bonus, US Ambassadors were just banned from performing the challenge, and of course I am eager to try anything that the US government forbids its people from doing. I should also mention that I haven’t actually seen any of the ice bucket challenge videos; my internet here is too slow. I am guessing from the screen shots that it’s pretty self-explanatory, but if it involves something other than pouring a bucket of ice water on your head and then making a donation, I’ve missed it.

Only one problem: Botswana is in the middle of a serious drought and we don’t even have running water in our house three days a week, so dumping a bucket of it over my head feels even sillier than it might otherwise. Instead I substituted something much more local: Mopane worms.

Mopane worms are a regional delicacy eaten with gusto by the local population either fried with tomatoes and onions, or cooked in a pot of soup, or just eaten dried and crispy like earthy, once-wriggling Doritos. Technically they are not worms; they are caterpillars, but I think if you are crunching down on a big mouthful of creepy-crawly this distinction is academic. 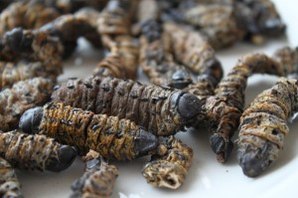 Mopane worms aren’t quite so pretty once they’re dead and dried.

They are called Mopane worms because they generally feed off the Mopane tree, but if you are ever in the area and want to sample a good Mopane worm, you can impress the locals by asking for them by their proper name: phane in Botswana, mashonja in Zimbabwe, and omangungu in Namibia. You should also know that the worms, once dried, get very coarse and scratchy and may actually hurt your skin a bit if you feel inclined to pour them over your head. I have a few pinpricks to prove it.

Like heirloom tomatoes at your favorite farmers’ market, Mopane worms are seasonal since they are the larvae of the Emperor Moth. Oh, and they are an excellent source of protein, calcium and iron. They are in fact so valued that the guy I bought them from was horrified to hear I would be dumping them over my head. “Don’t worry!” I said. “I will catch them with a nice clean towel so someone can still eat them.” He looked dubious, and I’m pretty sure I just added another person to the list of Ice Bucket Challenge haters. At least he’s in good company, jumping on that bandwagon just in time.

To keep up with the global theme, now that I’ve dumped something nonsensical over my head and given money to a charity, I challenge two more people in far-flung corners of the world. Amy Meyer in Bogota and Fahim Khan in Islamabad: you’re up! (I did it 31 weeks pregnant so there are no excuses.) Feel free to substitute your favorite local insect snack for the ice water, guys.

As a bonus, here is our adorable neighbor Gugu (Lila’s new favorite friend) demonstrating what a tasty snack Mopane worms are.