The Last Cheeseburger in Pakistan

The Last Cheeseburger in Pakistan

June 13, 2011 / Sara Sullivan / 32 Comments
One of the many misconceptions I had about Pakistan before moving there two years ago was that I might not get a cheeseburger during my time in the country.  I pictured a diet solely of rice, spicy curries, barbecued meat on skewers, and a few other dishes that I found on Wikipedia under “Pakistani cuisine.” But where would I get a regular old hamburger with cheese? (Other misconceptions I had for those keeping score: 1. That Islamabad would be in a desert wasteland like the Middle East, which it is nowhere near, 2. That I would always have to wear a head scarf in public, and 3. That I would definitely want to live in the “cool” diplomatic enclave near the Embassy which turned out to be neither cool nor a place I would ever live.)

That is why I titled the blog “Cheeseburgers in Pakistan.”  (Also because of that Jimmy Buffett song.)  I had no idea what to expect, I was willing to give up all the normal comforts of home including American food, and I was ready to have an adventure.  It turns out, after two years, my house in Islamabad, boisterously full of dogs and housekeepers and guards and geckos, was a place where I was totally comfortable, happy, and made only a normal amount of crazy by beeping UPS batteries on their last leg or the occasional lack of hot water.

Pakistan was like nothing I expected in many ways, even though I tried so hard to prepare thoroughly before I came. I did in fact use the karaoke machine I brought to town with such high hopes for various raucous and hilarious get-togethers. I never once plugged in the fancy “Progression Alarm Clock” that I bought specially for Pakistan so I could be gently awakened by a simulated dawn, because once I understood the electricity situation I feared it would blow a fuse (I was awakened by squawking crows instead, mostly).  I was wrong about being able to buy live chickens off the street in front of my house (lots of guardshacks and shotguns, but no hen vendors), and I was also wrong that I wouldn’t see any marshmallow peeps in Islamabad (the Embassy commissary specializes in processed American seasonal food).

I never once used the hand sanitizer I so carefully packed, I skipped all the recommended vaccinations and didn’t come back with any strange illnesses, but I did learn through a few battles with food poisoning the truth of that saying “the most dangerous thing in Pakistan is the food.”  I consumed an average of three cheeseburgers a month since my arrival of varying quality, happily none of which made me sick, and finally settled on the one from Mocca Cafe as my favorite, even after Salman Taseer was assassinated right in front of the restaurant a few months ago.  (This did make me veer more frequently towards take-out rather than eating in).

It has been a little over a month since I left Pakistan and came to the U.S., which means right about now I would usually be heading back to Islamabad.  But this isn’t my regular home leave or vacation situation, and I’m not returning; I’m staying in California this time. My house with its breezy terrace, my daily breakfast mango smoothie made with care, the overgrown vegetable garden, and my stacks of messy paperwork about outreach campaigns to the Pakistani public…they’re all gone, packed up, or inhabited by someone else now.

I learned a lot in the last two years: how to flourish in a developing country, how to work around government bureaucracy (sometimes the government of Pakistan’s but much more often our own), how to say “No problem!” in Urdu (pronounce it “coy baat naHEE”), how to make your own fun on lockdown weekends (answer: DVD marathons of “The Office,” Domino’s pizza, and buying a kiddie pool for your puppies to swim in), how to make your bodyguard double as a dog-sitter/casserole holder/personal shopper, how to get used to being stared at constantly all the time in public without getting creeped out, and how to wrap a silky dupatta over your head, neck, and shoulders in the most flattering way (Okay, I’ll admit: I never really did get the hang of this one. Usually I would go a few steps and turn around to see the scarf lying mangled a few feet behind me in the dust so generally I left it at home.)  I starred in a sitcom called “Welcome to Pakistan” (which sadly never aired since I moved before we could finish taping more episodes), I sang in a band, I threw lots of themed parties.

Most of all, I made a home.  I made friends–not just with other Americans–and learned how easy it was to accept the hospitality and graciousness of my Pakistani hosts.  I was invited to weddings, went on weekend trips, learned to blow shisha smoke rings, and was honored to be brought into people’s homes and lives.

Which brings us back to cheeseburgers.  I can confidently say I am the world’s foremost authority on the range and quality of cheeseburgers in the Pakistani capital of Islamabad.  At one point I even considered starting a website called “islamabadeats.com” to review the city’s restaurants since I frequented them so much, and of course there would have been a special cheeseburger section.  (Feel free to poach the idea now that I’m gone.)In the beginning, I stuck pretty close to Nirvana, the trendy salon/cafe frequented by expats which was located near my first office.  It offered a strange but fairly yummy burger (hallmark qualities: cucumbers instead of pickles and an artful smear of ketchup and mustard diagonally across the plate for the sake of presentation).  Nirvana was the only restaurant to stay open during Ramadan and also had the most delicious smoothies in town, including the Triple Strawberry which one of our consultants on the project called “better than sex.”  (I am only quoting here.)

In time and with the greater courage to bend security protocols, I branched out.  I tried Cafe Lazeeze (two thin patties stacked on top of the other to form the burger, an incomprehensible choice that luckily didn’t affect its taste), the Serena Hotel (burger best enjoyed by the fancy pool but most often eaten during rushed work meetings), and the Great American Steakhouse (Two words: stay away. Neither American nor great.)

The trajectory of my burgers followed my greater familiarity with Islamabad and my process of settling in. Eventually I was having Sajjid the cook make burgers at home, although more often than not they were veggie versions made from chickpeas or pinto beans. New restaurants opened, new discoveries were made, takeout menus picked up, and even occasional sabbaticals occurred. For brief periods the cheeseburger was abandoned as a staple food, like during the Great Equinox Detox of the fall of 2010, or the long winter of 2009 when a hot wing streak pushed out all other competition for a time.

But the cheeseburger always came back.  A few weeks before I left, when winter had given way to a typical 85-degree spring day, I was invited to do something very normal: go over to a friend’s house for a barbecue and to watch the game.  The game was cricket and the friend and his family were in Islamabad, but other than that it was exactly like what you have done yourself a hundred times: our host presiding over a smoking grill in the front yard, kids running around shrieking and getting ketchup on their clothes, mustard and tomatoes lined up on a side table and liters of soda condensing in the sun ready to pour.

On that day I sat in the breeze, loosely fitted in a Pakistan-appropriate outfit but wisely having left the dupatta at home, and chatted with our friends.  I knew I would be leaving soon, so I soaked up every detail of that peaceful, sunny, normal afternoon. It turns out the best cheeseburger in Pakistan can’t be easily ordered in an expat restaurant on your first weekend in town.  It is earned in a different way, through months of immersion in a culture, a city, and the process of making a home and a life.

Charbroiled, slightly misshapen, helpfully topped by one of the kids with a slice of cheese, and offered with hand-made secret sauce, my last delicious cheeseburger in Pakistan was eaten in the intimacy of someone’s home, surrounded by great company, in the relaxed vibe of good friendship. I thought if I moved to Pakistan I wouldn’t get to eat cheeseburgers while I was away.  I was wrong about that and lots of other things. I got plenty of cheeseburgers, and much, much more. 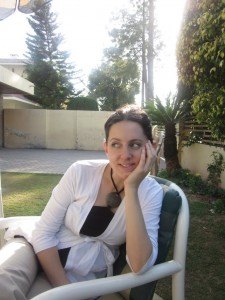