My mother died twenty-eight years ago today, in her sleep peacefully at home, after a three-year struggle with cancer. It was a Monday morning, just like today, and I was eleven years old, having hosted a birthday party with balloons, games and all my grade-school friends less than two weeks earlier. When my mom’s birthday comes around in December I like to get a colorful bouquet of flowers and display it in my house, picking out an assortment that I think she would have liked. Mother’s Day used to be a day I faced with dread, but it was reclaimed when I became a mother myself and it turned into a day of celebration again. But a death anniversary is different. It marks a terrible day: a day you don’t really want to remember. I have learned the hard way that ignoring it doesn’t work either. That’s a good way to find yourself losing it at work at a very inconvenient time, or snapping at your husband out of a nameless, irritable rage. So, I don’t do that anymore.

But it is hard to know exactly how to mark a sad anniversary, even more so when you are far away from home. Many of the things I could do–go out to lunch with my sister, visit my mom’s grave, or just be with family–are impossible when I am 10,000 miles away. But over the last few years I have started a new tradition, and it’s one you can do anywhere.

On the anniversary of my mom’s death three years ago I was very pregnant with Lila, weepy and bloated in Santa Barbara, sitting on the couch too tired to do anything except mope. Drew asked what my mom’s favorite food was. There were several options but what popped into my mind was the saltimbocca she would make for very special occasions: chicken pounded flat and wrapped up with delicate slices of ham and cheese into fancy packets sizzling out of the oven. (You couldn’t get veal in our small town in Arizona in the 1980s, so chicken it was!) I scoured the internet, checking the menus of every single Italian restaurant in Santa Barbara until I found one–the only one–that served saltimbocca. It happened to be one of the most expensive restaurants in town, but anniversaries are no time to budget, so we ordered a lavish take-out spread and ate it on the couch in candlelight, toasting to my mom, the new baby we were about to meet, and the fact that good Italian food improves almost any situation.

Last year on the anniversary I made stroganoff, a Denton family staple loved by my mom and all her siblings. The recipe is straight-up Midwestern grocery store ease: all you need is a few cans of Campbell’s soup, a few more cans of mushrooms, some ground beef and sour cream. It was designed to be put on the table in record time and make enough to feed a hungry family of six through the 1940s and 50s, which it did. But all the things that make the recipe so easy in America make it almost impossible in Botswana: the mushroom soup was all wrong–thin and watery without the creaminess that good old Campbell’s provides, there are no egg noodles to be found in the whole country, and sour cream is a commodity spotted only seldom and with great luck, as rare as the African Pitta so prized by Botswana’s birdwatching geeks. The stroganoff came out an unappetizing shade of brown and even our long-suffering nanny Patricia said after a few bites: “This isn’t good.” I could have been disappointed, but instead I just laughed and thanked my mom for a very particular gift she gave me–the art of making the best of it and not taking yourself too seriously.

The tradition works because food has a special place in the halls of memory, family, and loss. When my mother-in-law came to visit us in Santa Barbara just two weeks after Lila was born, she held the baby for hours, told her stories about all the cousins, and made us a lemon sponge pie, which had been her father’s favorite. She used the bright shiny lemons from the Santa Barbara farmers’ market that we had visited the day before, slowly strolling the stalls with a tiny, tightly bundled Lila in our arms. The pie was silky and golden: tart lemon in a soothing creaminess that made me understand why Grandpa George (“Grumpy”) had enjoyed it so much. Neither Lila nor I would ever meet Grumpy, but tasting his favorite pie gave us a small peek into his world. I had the last piece for breakfast the next day, the perfect reward after a night spent nursing Lila every 90 minutes around the clock. It is why even now in Botswana, as our lemon trees in the backyard hang heavy with fruit, I went to Airport Junction last week, bought the perfect ceramic pie tin, and emailed Granny Sally for the recipe so I can make lemon sponge pie with Lila, moving the tradition forward as we make our own new memories. 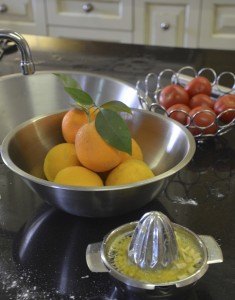 Every Christmas when I make Nutcracker Pie, my Grandma Jerry is there with me while the walnuts and whipped cream and saltine crackers join in their magic alchemy to make a light, nutty crust. When I take a bite of a perfect, crisp Waldorf salad, Grandma Marjorie is there in her full Martha Stewart glory at my elbow, giving me advice and telling me I am the most talented granddaughter in the whole world. When I taste beef goulash, my grandpa is there sitting next to me, warm and hearty and recounting the story of how my little sister used to demand we always eat it with dill pickles.

Today my daughter has pinkeye, and I have a wicked cold that feels like swallowing glass and my job might be ending soon and we are moving to South Africa in 2 1/2 weeks to have a baby and everything feels just a tad overwhelming, like I could crack at any minute. Today would be the perfect time to sweep the anniversary under the rug, pretend it’s just another normal day, decide to think about my mom when I had a little more free time, like when I was not, for example, pouring borax solutions into Lila’s eyes in the tub while she squirms and hollers.

But instead we’ll make shortcake. It is spring in Gaborone so it is strawberry season, and juicy red jewels are pouring in from the outlying farms to every grocery store in town. They are bright red and delicious and they will only last a few weeks. We’ll make the whipped cream by hand, pouring in a little sugar and vanilla without measuring, just like my mom used to, and Lila will lick the beaters. We will sit down with heaping bowls of shortcake goodness, and I will be transported to one of a hundred Michigan summer nights in my mother’s hometown, where the berries were always ripe and I would sit on her lap while the whole family chatted on the porch as the sun went down, where it was impossible to imagine that things would ever be any different, that I wouldn’t always be surrounded by those precious people I loved. Today is the perfect day for that.