I am buying stuff. My mode is consumer, the internet my gateway. It turns out The Magic Bullet was just the tip of the iceberg. The last three days have seen me purchase, in no particular order:

An iPod speaker/docking station thing
An alarm clock that wakes you up with ocean noises and gradual soft lighting that approximates the gentle dawn.
A metal thing to hang all my necklaces on.
A year’s worth of my favorite shampoo, conditioner, and chapstick.
A new yoga mat.
Green Vibrance vitamin powder that tastes like grass.
A black cocktail dress for “embassy parties.”
A webcam.
grapefruit seed extract.
charcoal.

It’s a weird list; I recognize this. It’s the kind of list that emerges when you 1) are moving to a foreign country without health food stores or Western retail and 2) have spent most of the last decade in graduate school. (The grad school thing just means you’ve been broke for a long time and couldn’t justify paying for frivolities other than heavy anthologies of Irish drama and endless stacks of photocopied scholarly journal articles at 10 cents a page.) Anything unnecessary that I wanted over the last ten years I pretty much didn’t buy. But I never forgot that I wanted it. Which brings us to the Progression Alarm Clock.

I’m sorry: did I call it an alarm clock? My mistake. It’s actually the Progression Wake Up Clock, as its manufacturers take care to point out. That’s because this product is specifically designed not to alarm the body into wakefulness, but to rouse us how nature intended. That is: peacefully with the earth’s light and sound, the way our ancestors were gently awakened out of their caves by a pinkish, rosy dawn peeking over the mountains before being eaten by woolly mammoths. 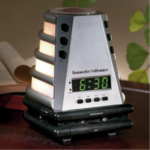 I want it. I want it really bad. I’ve wanted it, in fact, ever since I first saw an ad in a magazine (I want to say it was in The New Yorker but Self is just as likely) many years ago. I am not a morning person, which means I always wake up grumpy and a little violent. As soon as I saw the ad, I realized this is due to the harsh effect of the jarring modern alarm clock, one that rips us right out of our circadian sleep rhythms with its cruel and malicious beeping. Just think of that sound right now and tell me it doesn’t make you want to hurt something a little bit.

So I need the Progression Wake Up Clock. It would be good for me, it would be good for anyone I run into within two hours of getting up. I can choose from ocean sounds, songbirds, thunder storms, mountain streams, and something called “Zen Melody” to help with these waking up moments. It comes with little aromatherapy discs that warm up as the light comes on to send out nice wakeful scents. And most importantly, its soft light begins to glow half an hour before wake-time so your body can respond to the daylight and get ready to embrace the morning. (I have never embraced the morning.) Did I mention the aromatherapy choices are lavender, stress relief, energy, and coffee? I’ve already spent some time thinking about these scents and which one I am going to try first.

You can see I’m on a weird little spending spree here. Don’t get me wrong: I’m just as cheap as ever. ($12 martini? Why, when filling a flask at home is so much better! etc.) And I’ve never been a big shopper. But there is something about the idea of not being able to buy anything normal for a year that fills me with unfamiliar shopping angst and questions like, shouldn’t I buy an extra microplane zester to take to Pakistan? Won’t I need it for all the fresh nutmeg I’ll want to sprinkle over my homemade custard puddings? Absurd, I know. But it’s happening and it’s hard to stop.

Think about everything you might need or want for the next twelve months of your life. Then realize that, because of a slumping economy, all of those things are on sale right now at drastically slashed prices and you have less than three weeks left to buy them. Tell yourself that you’ve got to comfort yourself with something in a country where they lack alcohol, karaoke bars, and consistent electricity. And that’s how you end up staring at the Hammacher Schlemmer (not a fake name) website mulling over the fine distinctions between two different models of clocks that use lights, sounds, and essential oils on felt pads to wake you up. I’m not proud of it. But this is where I’m at.

Next up: Should I buy the Kindle, or is reading books off a computer a perversion of all that is good and holy?