In order to work in a foreign country, you generally need the permission of their government. This makes perfect sense but is one of those things you don’t think about until you find yourself in this particular situation.

Botswana is a sparsely populated country (at barely over 2 million people), and it is fiercely protective of its own citizens, which translates into being a bit stingy when it comes to handing out work permits for expats. You have to demonstrate clearly that you possess a “special, valuable skill” that is not already readily available in the country, and that your job has already been advertised widely to give citizens a chance to nab it first. No work permit = no job, so the stakes are high, especially when you’ve already moved your whole family to Botswana at great personal expense and exhaustion of energy and you literally have no home to go to if they kick you out.

The Ministry of Labour and Home Affairs holds the cards, so it was one of the first places I had to go upon moving to Botswana. The Ministry is housed in a huge, shiny building with blue-tinted glass windows that nicely match the blue on the Botswana national flag. The complex immediately gives you false hope with its air of sleek modernity and progress, until you turn the corner into the cramped immigration room where 80 people stand around looking like bedraggled arrivals to Ellis Island after a hard ocean crossing.Getting any type of official document in a developing country is high on my list of least favorite things to do in the whole world. Picture the DMV on a busy Saturday at the end of the month, but triple the wait time, cut the staff in half, and remove any semblance of order or propriety. The “no cutting” rule for lines, as any world traveler knows, is very much an American thing. Almost everywhere else in the world it is a free-for-all and it drives me crazy.

In my second hour of waiting, three women bustled their way into the room and right to the front of the line. They were freshly primped and pressed, clacking in high heels and business suits in bold colors of purple and red. Their intrusion instantly added thirty minutes to my wait time. People behind them made faint grumblings but let it happen (Batswana are famous for their peaceful demeanor), and I figured I shouldn’t make a scene my first week in the country either. Instead I shifted my weight to the other foot, rubbed my aching back with my thumbs and focused on the “Rules of Customer Care” sign on the wall. The first was “Never keep a customer waiting.”

An adjoining sign encouraged all government employees to adopt the “C’s of Communication,” in which I took a professional interest. I had the next three hours to ponder them while I realized that hell is really a small green-painted room with fluorescent lights and three bored Batswana immigration officials sitting at counters behind bars. Here are the C’s themselves, so you can absorb them too and use them in all your future dealings.

Number three is the only head-scratcher. I know that I was ready to CHECK OUT after one hour of waiting but at that point still had two painful hours left to stand in line with all the disheartened citizens of Gaborone and the office manager from my project, Bridget, who accompanied me on this errand of death. 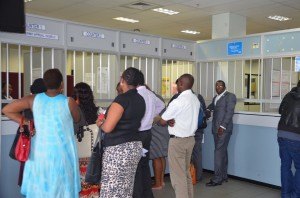 Don’t be fooled by the few people in line. It will still take two hours to process this many customers.

I decided not to squander the time completely. While making tiny, inching progress behind a tall woman carrying a shiny black “JMARY CHOO” purse over her shoulder (knock-offs are more convincing when they’re spelled right, my friend), I grilled Bridget on where to buy fruits and vegetables, pastured eggs, the freshest beef and chicken. I found out the best salon for pedicures and massages and what they should cost, where her village was, how many children she has and what she suspects the nanny does with them when she’s away (gives them gum, feeds them candy, lets them “learn” how to get down from the bed by repeatedly falling off it).

I discovered from Bridget that beef here is cheap and all of it is grass-fed, and that if I want free-range eggs I just need to ask for “marathon chickens,” so named because they run around the roads all day. I learned the top five crops planted by most Batswana in their private four-hectare farms outside of town (maize, millet, sorghum, peanuts, beetroot), and how to locate the food trucks on the side of the road selling local carrots, cabbage, and watermelons.

After all that, our time at the actual counter, even with fingerprinting, took less than five minutes. The morning made my back spasm, my feet chafe, and my head grow dizzy from plummeting blood sugar, but it was a useful indoctrination into Botswana life and that’s worth something anyway.

Cooking from the Couch–Southern Africa Style