We are deep in the middle of holiday season now, having blown by Halloween and Thanksgiving to arrive next week at the grandaddy of them all, Christmas. And it won’t be too long before New Year’s, Valentine’s, St. Patty’s and all the rest roll around again.

For many expats, leaving home and never again having to show up at your in-laws’ door bearing pie ranks as one of the perks of moving overseas. But for others, any holiday can be a hard time of missing family, country, and traditions left behind. Here are ten ways to enjoy yours holidays as an expat, no matter what time of year:

1. Drop your expectations. Every country has its own favorite holidays, and they may not match up with yours. Easter is a mainstay of traditionally Catholic and Christian countries, but it may not get much play anywhere else. Orthodox countries celebrate it, but on their own calendar and with different traditions altogether. (Alithos Anesti, anyone?) In a Muslim country, Christmas can feel like just another day in December. You’re obviously not going to get any hoopla on the Fourth of July outside America, but most countries have their own independence days dotted around the year that mean a bonus day off work and maybe a parade or a fighter plane flyover to stir things up. Keeping an open mind and going with the flow are good traits for expats to have every day of the year, but especially on the celebratory ones.

2. Pick your favorites. If there’s a holiday you just can’t live without, choose to make that day special and import as many longstanding traditions from home as you can. It will take some planning and creativity, but for your favorite holiday, it’s worth the effort. It’s the reason I packed bright purple Peeps the first time I moved overseas and why I scoured the market stalls of Islamabad to find a substitute gourd to make my famous butternut squash soup for Thanksgiving. (The soup came out a disturbing shade of green, but it was delicious.) A friend who moved to Kazakhstan last December didn’t even have sheets on the bed before bringing out the menorah she had packed in her suitcase for the first night of Chanukah, and I always recommend to first-time expats that they fill one box of their shipment with some of the cheap, lightweight decorations and doo-dads that make American holidays easy. 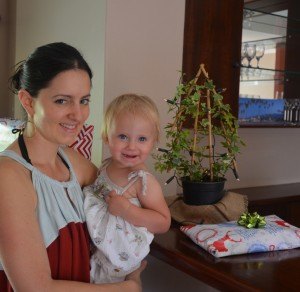 3. Immerse yourself. On the other hand, loosen up a little and let your new home give the familiar holiday calendar a fresh update. The famous Christmas markets of Germany, the Japanese custom of women spoiling men on Valentine’s Day, and the special good luck foods eaten around the world on New Year’s are just a few of the surprises you wouldn’t want to miss.

4. Let movies make it better. When homesickness on the holidays strikes, Hollywood can help. A good arsenal of themed movies for every occasion offers the chance to feel at home, even if the weather, food, and traditions are all foreign. I can smell the new snow in Bedford Falls on even the hottest African afternoon, and watching “When Harry Met Sally” takes me to the best New Year’s Eve party in town, no matter what town I’m in.

5. Go all out. One thing common to all expat communities I’ve encountered is the willingness to have a really good time. During the week before Halloween in Gaborone there were four, count ’em four, opportunities just in my own social circle for grown adults to dress in Halloween costumes and dance the night away. It’s one of the things I enjoy most about living overseas: being surrounded by people who know how to have fun and don’t take themselves too seriously. Whether it’s showing up at the park as a life-size Easter Bunny, throwing a St. Patty’s corned beef bash for 50, or convincing a local restaurant to do a Mexican menu for Cinco de Mayo, expats know how to go big or go home and the holidays are no exception.

6. Don’t worry about the kids. It is easy to get hung up on giving your offspring the “perfect” holiday experience replete with your own childhood traditions, but that ship probably sailed when your passport got stamped in your new home. That’s why I don’t lose any sleep over the scrawny plastic tree that we trot out every December 25th in Botswana while the sun bakes the desert outside to a toasty 100+ degrees or the fact that my kids think firecrackers are for Christmas. That being said, some things are sacred, which is why I canvassed all my neighbors in October to ask if they were willing to open the door for a pint-size 1920s flapper so my daughter could have her first trick-or-treating experience. (I got six houses to participate. Not bad for a country that pretty much thinks of Halloween as the devil’s holiday.) 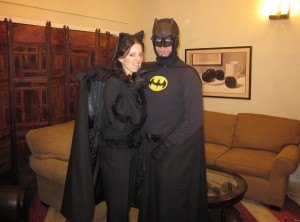 Stirring up trouble on Halloween, 2010 in Islamabad

7. Turn it into a party. Thanksgiving is an example of a great holiday for the expat looking to reach out: a day where nothing is required except eating a large meal and mumbling a few words beforehand about all that is good in the world. Assuming you can wrangle local friends to your house on what is for them a regular Thursday, it’s the perfect opportunity to cement friendships while introducing people to an American cultural mainstay. Along the same lines, an Easter Egg hunt is ideal for delighting a big group of kids and their parents, because no one in any country can resist plastic eggs with candy inside. Just be prepared for a potential crowd: when expat friends of mine felt lonely celebrating the eight nights of Chanukah away from their families, they invited friends and colleagues in Botswana over for fried foods and celebration, and 75 people showed up!

8. Be sensitive to difference. Being a good guest in a foreign country means respecting their special days too, which is why you could find me every day at noon during the entire month of Ramadan furtively slurping down my lunch in the office supply closet when I worked in Pakistan. You’ll want to know the basics of the religious and cultural rituals where you reside to make sure you don’t offend your hosts or ruin their own routines. For example, while Halloween has become a major occasion in the United States, it may pass without a blip in some countries due to discomfort with its “underworld” element, and I’m still embarrassed about the time I served ham alongside the turkey when a few Muslim friends came to a Thanksgiving dinner celebration. They didn’t utter a word of complaint, but I found out later that pork shouldn’t even be prepared in the same kitchen.

9. Do something spectacular. My friend Robin and her family ushered in Christmas at the pyramids one year and by swimming in the Arabian sea the next: two exotic locales that were local for them. One antidote for the holiday blues is doing something unique that is only possible because of your far-flung location. And there’s another bonus: instead of laboring over a stack of holiday cards, you can post the resulting family photo to Facebook with a few words of good cheer and you’re done!

10. Loosen the rules. Being far away from family obligations means you can write your own playbook. Always hated Halloween? Skip it: your neighbors won’t notice. Think Thanksgiving dinner is best served at a hotel? Order away. And if you want to spend Christmas catching up on work emails and eating take-out, you can. (Although if you have children, they probably won’t appreciate your Grinch routine.)

The bottom line is that the best holidays happen when you are free to enjoy the moment and create new memories, and being in a new country can actually make that easier. There is something special about spending holidays overseas: a magical element that seems to make things more memorable.

That’s why I can tell you that it was Christmas Eve 2009 in Islamabad, Pakistan when I discovered the most disgruntled elf in the world in the lobby of the Marriott Hotel. Or that on Thanksgiving Day 1996 I made yams with marshmallows for 40 nuns in a convent in rural England and can still picture their amused faces. And I’ll never forget my most recent Fourth of July, drinking ice-cold gin and tonics out of a steel safari mug under the sparkling stars of a pitch-black night in the southern Africa bush for a different kind of fireworks show.