A few days ago the doorbell rang. I was in the middle of a particularly deep and delicious nap of the variety that only the sleep-deprived can understand. I hauled myself out of bed anyway and picked up the intercom phone to see who it was. The voice on the other end mumbled “Rubbish,” which meant the garbage men had arrived. I pressed the button to open our electric gate to let them in and got back into bed.

A few minutes later I thought “That’s weird: the garbage cans are outside the gate: why did they ring the bell?” It was only after I went outside and saw the cans of garbage still there, full and fermenting over with weeks’ worth of trash, that I realized the trash guys were ringing the doorbell for their “tip.” When one wasn’t forthcoming, they drove away. Welcome to Botswana: tipping at restaurants is optional, but if you don’t tip the trashmen, your garbage stays on your curb indefinitely.

I am on principle opposed to paying for this service. But it seems this is the custom in my neighborhood and if we don’t pay, our trash will likely fester there forever. So now we are at an impasse, albeit one that damages me far more than the garbagemen, since I am the one living with a putrid mess literally pilling up on the doorstep.

We do a lot of entertaining because Gaborone is a fairly small and sleepy town and you have to make your own fun. During one three-week period of the holiday season we hosted a big pre-Christmas feast, a Christmas Day barbecue, and a New Year’s Day Mexican food spread. For each of these events I put out the tablecloths, lit candles, had the patio swept and the glasses sparkling. I offered grilled shrimp appetizers and buttery beef tenderloin and homemade chocolate torte and a pile of stinking, heaping trash out front to greet everyone as they slid through the gate.

I don’t know who will win this battle (I wouldn’t put much money on me…these garbagemen are good at their game), but every single day that I drive in and out of my house I am reminded of the pointless war I am in. Every single day, bags of everything we had thrown away and hoped was gone forever are sitting there in plain sight in the blistering sun, black plastic melting while picked chicken bones, decaying vegetable matter, and used Kleenex wads sit inside going nowhere, a silent and accidental art installation to remind me that I am not in control of my universe and never was.

The pile of garbage has become a daily reminder of one more thing I need to muster up energy to deal with, one more thing to feel defeated by during this especially busy season of life. The truth is I am barely keeping my head above water: raising two kids in Botswana, far away from home and family while holding down a full-time job and trying to remember to buy electricity and which days we won’t have running water (Monday, Thursday, and Saturday).

So tonight I am trying a different tactic. Tonight I am embracing this pile of trash instead of making it my enemy. The garbage collectors may not come back for another month or more, so it is high time to get comfortable with the mess. I’m going to stop sighing and clenching my teeth in exasperation every time I nearly back the car into the whole pile exiting the driveway and every time it welcomes me home after a long day at work. Instead I’m going to fly my freakish trash flag high. When the effort of hiding all the crap out of sight is too exhausting, it’s better just to leave it on display.

And in that same spirit of confession, here are a few more things I’d like to get off my chest.

I haven’t posted on this blog since December. I believe that writing at least once a month is a minimum goal for a blog but there wasn’t a single thing in the entire month of January that I wanted to say. Except maybe “I’m tired.” Or “Are all the chocolate-covered pretzel sticks gone?” That would have made for a short post.

I have a full-time live-in nanny, a housekeeper, a gardener, and a driver, and I still feel overwhelmed by housework and general life management.

I know nursing my son to sleep is a bad idea that is creating a sleep monster. I still do it every single night.

We don’t really take showers at my house anymore: the nozzle is clogged and using it is like trying to clean yourself in a tiny drizzle of elf spit. We mostly just jump in the pool instead.

I have gotten two colds in less than two months but secretly enjoy the excuse to eat ramen in bed while watching old episodes of Parks & Recreation.

I haven’t posted the professional newborn pics we had taken of the baby on Facebook yet because I don’t like how my post-birth puffy face looked in them. I’m going to do it soon anyway because, hello: vanity.

So there’s all my trash this week aired out for the world to see. It feels good: I highly recommend it. Feel free to jump in with a few pieces of your own if you’d like. 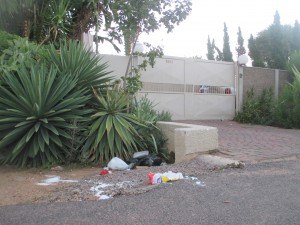 UPDATE: Not 24 hours after I wrote this post I went outside to find all the trash: gone! Well, mostly gone. If we call the sprinkling of flour an homage to the winter snows we don’t get in Botswana and turn a blind eye to the other detritus left behind, we can call this ordeal RESOLVED! Thank you Gaborone Sanitation Department for (mostly) doing your job.