Labor Day in America was on Monday (Yes, I still had to work. But I do get local Botswana holidays like “Ascension Day” so I shouldn’t complain.) This means midterm election season in the United States has officially kicked into high gear. Barely anyone votes in American presidential elections, let alone midterm ones (relatively speaking) so I don’t imagine this fact will affect too many people. But it will at least result in a slew of cheesy ads and a little mud slinging in tight races.

Botswana’s own elections are coming up on October 24, but it’s the big one: the presidential race that only occurs every five years. You know it’s campaign time in Botswana because every ten yards or so on the streets, colorful placards with candidates’ faces on them are stuck on telephone poles. You also know it is election season due to the highly suspicious lack of power cuts the last few months—the government’s way of convincing the people what a good job they are doing providing electricity. I expect the country to be plunged into utter darkness soon after the polls close to make up for it.

While waiting at a red light on the way to work this morning, I was able to take a good look at the most popular campaign poster plastered around town. The poster shows a dozen square little photos of the ruling party’s candidates on a plain white background with the rousing slogan:

“There is still no alternative.” 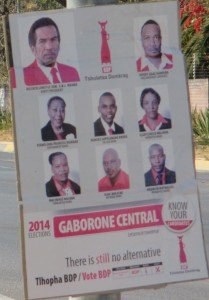 While I punched at my dashboard making futile attempts to get the car heater working (we’re still at the tail end of winter here and the mornings are cold), I thought about the motto. It’s not very compelling. I can only assume that the tagline for the last presidential election five years ago was something along the lines of “There is no alternative.” That doesn’t inspire a lot of enthusiasm either.

Botswana has held ten democratic elections since its independence in 1966, more than any other country in continental sub-Saharan Africa. It’s an impressive amount, but it is slightly less impressive when you discover that there is really only one party, the Botswana Democratic Party, and that no one else has any real kind of chance. In this case the politicians are just telling the truth for once: there is really no alternative.

Further complicating Botswana’s image as a model of shining democracy is the fact that the current president Ian Khama is the son of the country’s first president. On the other hand, we have the Bush and Clinton dynasties so maybe people in nepotistic countries shouldn’t throw stones. I have to question Botswana’s succession rules a bit, however. Botswana’s second president was appointed as a member of Parliament, promoted to Vice President, and then automatically became President when the first President Khama died, all without the inconvenience of requiring a single vote from a single citizen of Botswana.

n off more people than it would attract.

Even after two years of living in Botswana, I’m sure I offend people with my American enthusiasm all the time. I am fond of hyperbolic statements, sweeping pronouncements, and high praise. That kind of behavior is usually greeted by a weak smile and sometimes a palpable moment of discomfort, especially if the object of praise is the person I am speaking to.

Supposedly this has something to do with Botswana’s original tribal roots, a culture in which homogeneity was important, and conformity–NOT sticking out–had one of the highest values. To this day the public school system in Botswana emphasizes sitting very still and not drawing attention to yourself. This is so foreign to my American consciousness that I kind of want to protest it (another very American urge).

So their motto is understated, they are wearing red, and they are certain to sweep the next election. The only thing left to ask about the Botswana Democratic Party is what on earth is up with that logo. I hope the PR company who came up with it did it for free. I had to blow up the image very large on my computer screen to even see it, and I still don’t understand. Is that an oil drill? A gun? A perturbed Mrs. Butterworth annoyed that she has a cow’s head?

I did some diligent research (this involved canvassing the receptionist, office manager, and driver at work while they were all hanging out in the lobby) and discovered that the logo is an old-fashioned tire jack, not a bovine pancake syrup bottle. It symbolizes the party “jacking up” the country to help it rise to success. Okay, so it still doesn’t really translate.

All three of my colleagues said they would definitely be voting for the Botswana Democratic Party again and they would definitely be voting, even though for at least one of them, this will require driving an hour out to his home village and standing in a long line all day. They did like the fact that Khama travels all around the country and asks people their opinions on what would make their lives better. I’m not sure exactly what the President does with this information; none of my colleagues said that BDP was great or fantastic or effective or super. They all just said something I should have guessed by now: when you take a look at the other (tiny) opposition parties, none of them stand out as any better.