Nothing is weirder than a Peep. I’m ready to eat a lot of new, strange food, starting in less than two weeks when I move to Pakistan. Twelve different kinds of mangoes and three different kinds of pomegranates, I’m told. Goat curries, bitter gourd, mutton in tomato sauce, and chicken. (Well, chicken’s not weird, but the fact that you can buy it live off the street in front of your house is.) I love curry and flatbread and samosas, but I’m sure my visits to my favorite Indian restaurant down the street in Boston will not have prepared me for full immersion into the daily food culture of the subcontinent.

But back to Peeps, the weird food of my own country. You know ’em: fluorescent little marshmallowy chicks and bunnies that appear suddenly in every drugstore and supermarket this time of year in an array of colors found nowhere in nature. They’re weird, they’re highly beloved, and they’re very American: add them to the list of things I won’t be seeing in Islamabad. I’ve had some time to think about Peeps a lot today as I scraped smashed Peep out of the carpet and pried dried Peep off the sides of empty martini glasses. (Peeps figured prominently in my spring-themed going-away party last night.)

What are Peeps? Marshmallow, obviously, and a crapload of toxic food coloring, but oh so much more. Peep is an industry onto itself. You would think that, much like a Cadbury egg, they would be cursed with the problem of seasonality. They are chicks and bunnies in lurid approximations of pastel colors after all, trotted out at Easter for candy baskets and the cheeks of children twitchy for their sugar high. The day after Easter, yon adorable Peeps are as dated as crocs and peasant dresses.

Someone at Peep Central has been working overtime to solve this little problem, though. Enter Halloween peeps: charming ghosts, angry little cats, and mini squishy pumpkins. (You can check them all out at the official Peep website. Turn the sound down first though. Not because it’s inappropriate for work but because more than sixty seconds of listening to the theme music will turn you murderer.) There are also Valentine’s Day peeps, that say “don’t get pissed at me for being so cheap” with a variety of red hearts and little “chocolate” bears. (Question: Should marshmallow ever be chocolate-flavored? Answer: Nope.) “Holiday” peeps were the biggest marketing challenge, I suspect. The R&D team landed on fat, slightly misshapen trees and bulbous white stars in peppermint flavor. Yummy. 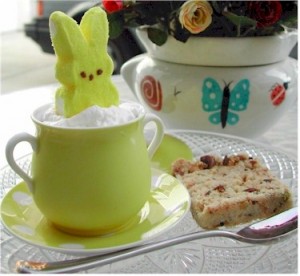 The Peep People would be wise not to let everything hang on the success of their holiday peep contingent. And: they haven’t. Instead they have launched a massive campaign to make Peeps an integral part of your dining and entertaining life. If you thought Peeps were just for eating out of hand, think again!! Peep pushers will tell you differently, encouraging you to start slow with a simple switch in your morning routine from biscotti to bunny. Next, you might consider Peep Dips for your upcoming sophisticated cocktail party or book club. It’s the new fondue! No, wait, this is. Peep Pops could make charming baby shower favors that would (bonus) survive a nuclear winter. Maybe you need an elegant addition to your in-laws’ Easter dinner? Don’t bring ham, bring Peep!

I almost don’t even have anything to say about the Tree of Peep. Just that if you meet your boyfriend’s mother for the first time and she serves this, walk away quickly. And quietly, as if your feet are the feet of a lithe little bunny made out of soft marshmallow in a shade of purple. Let’s take a moment out of our Peep tour to pity the frustrated, out-of-work sous chef who paid that month’s rent devising ever crueler and more unsettling manipulations of Peep product. I think his inspiration finally ran out on this one: evidence of a mass peep-in-your-pants accident.

This is not the end of our trip down the rabbit hole. After the officially-endorsed Peep offerings come the unauthorized biographies, in which Peep-lovers have taken their passion and turned it into art. Not for kids, this one: 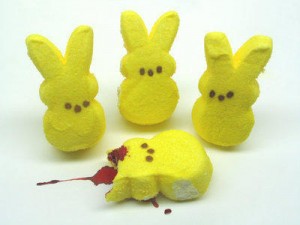 Eschewing bloody theatrics for a more subtle violence, I think Cannibal Peeps speaks for itself: 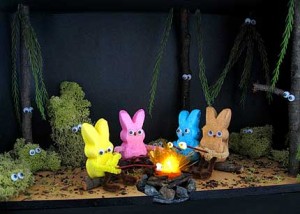 Showing you can be clever with words and with marshmallows, I move us along to Peep Show: 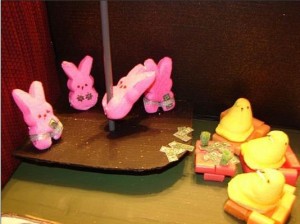 And not to be outdone in the pun department is Peep Showdown, a sort of sugary West Side Story: 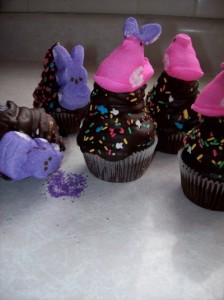 Finally, there is Peep Art for Star Trek aficionados, which, through the masterful layering of geek onto different kind of geek, gets us someplace truly special. 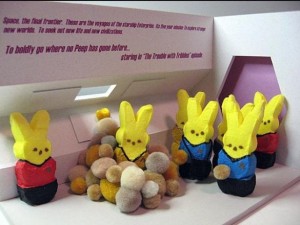 Like I said, my going-away party was last night. There was eating, there was drinking, there was dancing, there was singing. There was flying candy and a surprisingly competitive egg hunt. Just about the only thing we didn’t get going was a rousing round of Chubby Bunny, which would lead us into a whole other category: Games with Peeps, had we only the time. (For the curious, Chubby Bunny is a Peep-centric party game with an extremely high vomit-quotient.) Did I mention you can also get Peeps sugar-free? Oh, the fascinating facts just go on and on.

What do Peeps have to do with Pakistan? Nothing, except that weird food is in the eye of the beholder, I guess. And also that I don’t want to think about how much I hate to say goodbye, how wonderful my people in Boston are, how much I will miss them. So I’m spending some serious time tonight thinking about Peeps instead, and wondering how they got those little pasties on the bunnies.

The Beat Goes On